HOBART shipbuilder Incat has gone from building local boats four decades ago to now supplying the world’s best and fastest ferries to markets stretching from Trinidad to the Canary Islands, with its success helping grow a network of business suppliers in Tasmania.

Incat started building ferries with less than five employees from a site the size of a quarter acre house block in the 1970s – fast-forward more than 40 years and they are building boats about the length of a football field, from a site bigger than five Melbourne Cricket Grounds.

“The multiplier effect is very significant, where we’ve got 650 people [full-time employees] at the moment, there’s probably at least 500 others that are supplying us with all the nuts and bolts that we need,” Incat chairman Robert Clifford says.

“We do have a strong relationship with all the supporting businesses around Hobart. The engineering firms, the structural fire protection people, the people who supply the nuts and bolts, the plumbers, the painters.”

Tasmania’s economy is growing at its fastest pace in a decade, wages in the private sector are growing faster than any other state or territory and Tasmanian businesses are the most confident in the country.

“We do have a strong relationship with all the supporting businesses around Hobart. The engineering firms, the structural fire protection people, the people who supply the nuts and bolts, the plumbers, the painters.”

There are more than 36,500 small businesses powering the Tasmanian economy and these enterprises are responsible for employing almost half of Tasmania’s total private sector workforce.

Hobart’s Liferaft Systems Australia, which manufactures marine evacuation slides and liferafts, is part of this ecosystem of businesses – and their managing director Mike Grainger says they are not the only business to come from Incat’s ascension.

“We started our company because of Incat, as did many other satellite companies that are still in business today,” he says.

When they started manufacturing their liferafts for Incat almost three decades ago they employed about six people. They now employ about 70 people full-time and supply their marine evacuation systems to navies across the world.

“Liferaft Systems is a very successful business, it came from our need to have a better product, the product we were buying from Europe was not good enough,” Mr Clifford said.

“We found that out many years ago and we decided we ought to help Liferaft Systems Australia set up business and produce a better liferaft.” 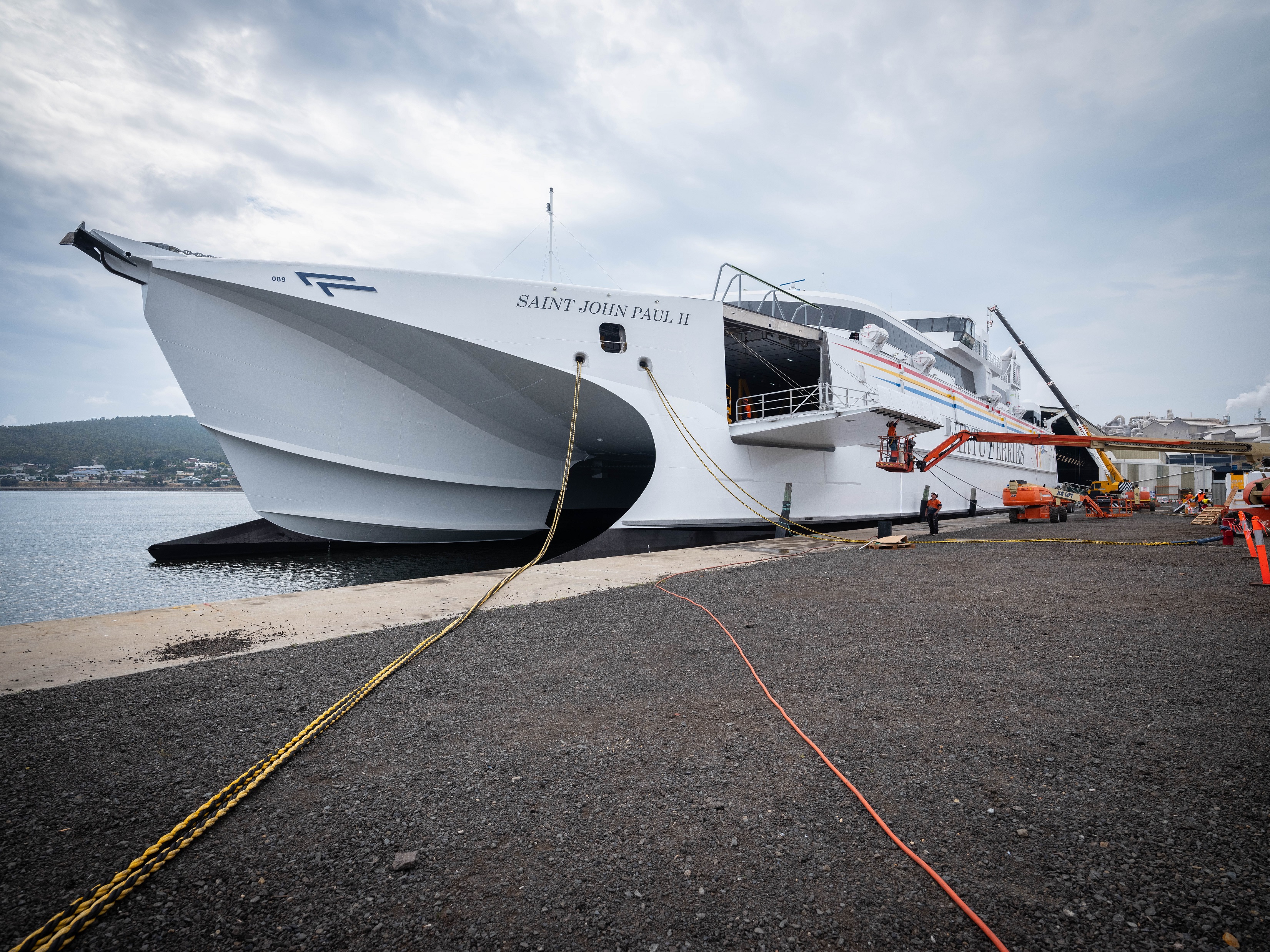 CBG Systems, a fire protection manufacturing company, was a second local business which emerged as a result of Incat’s growth.

“Our relationship supplying to Incat has helped our business grow and become recognised around the world for our fire protection technology.

“We have become a leading global manufacturing company because we strive to identify and develop high-tech solutions for innovative customers like Incat.”

Trade between small, medium and big businesses is worth about $500 billion to the Australian economy every year.

Understanding their customers has also been vital to Incat’s success.

“We have supplied ferries and been instrumental in talking to ferry operators all around the world for the last 40 years … we understand what the customer wants,” Mr Clifford said.

“Being an island state, we’re a little bit different to the rest of Australia but that’s part of the success of Incat, we are an island and we are supplying ships to the world. Most of our ships are going to places and serving islands.

“We have boats in South America, Trinidad, North America, Canada, all through Europe, the Canary Islands. The sun doesn’t go down on the Incat empire.”

“We put a lot of emphasis on training the people to increase their skill levels in all areas.”

About 50 of nearly 90 ferries that Incat has built since 1977 are in operation overseas. By 2003, four Incat-built ferries had been used in military support operations for the Australian and US navies, including the Hurricane Katrina relief program.

While their supply chains provide the “nuts and bolts”, many of Incat’s employees have been trained through a TAFE course directly across the road from their Derwent River base.

It was a partnership and initiative that Incat also helped develop.

“It is very important to have a TAFE-type system in place to teach all the skills. We really couldn’t do without that,” he said.

“In the very early days, we did have our own training system but that was taken over by TAFE to our advantage. So, we work very closely with them because it is an integral part of the business.

“We put a lot of emphasis on training the people to increase their skill levels in all areas.” 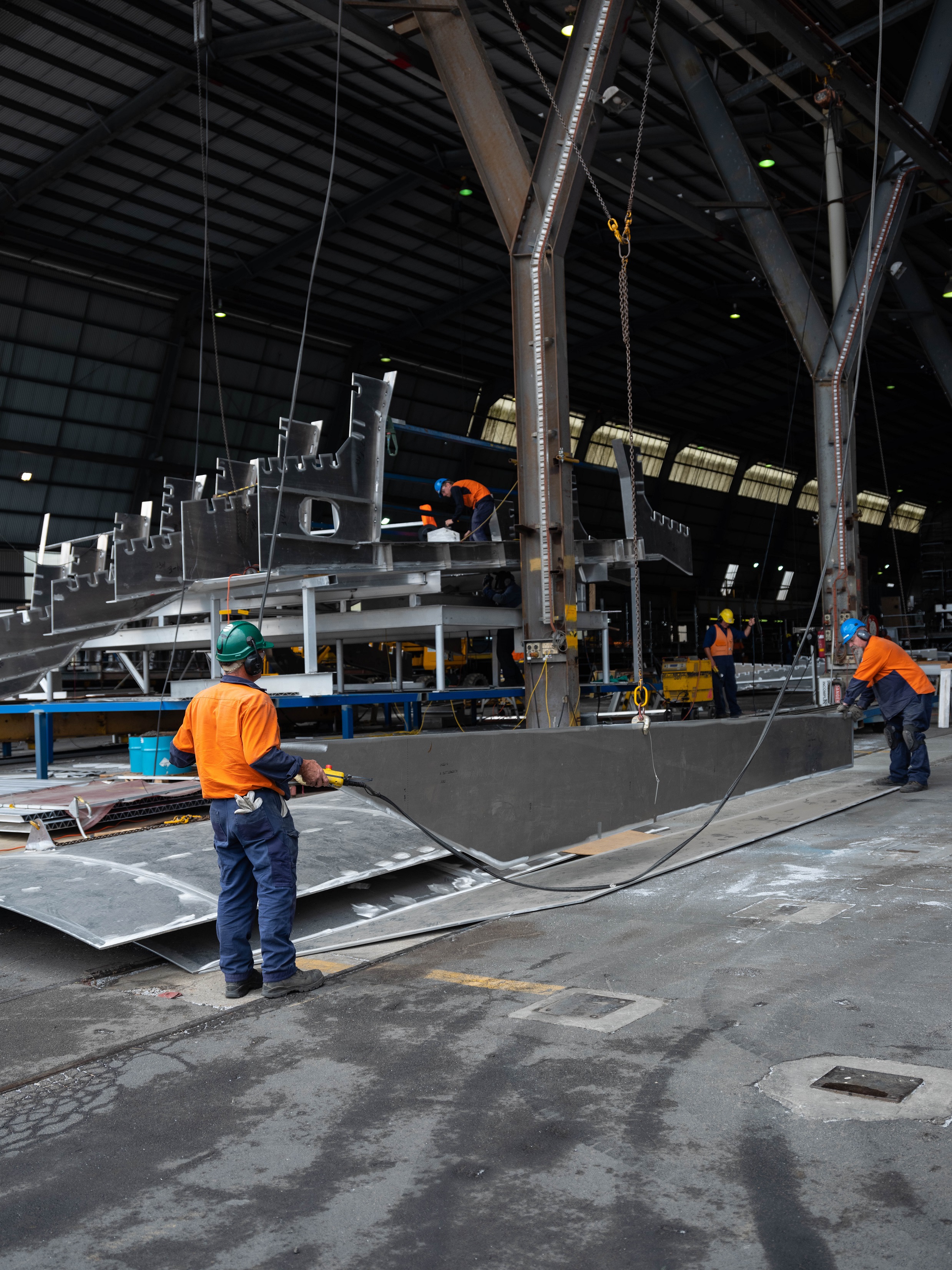