Companies creating white-collar jobs in Geelong are fast becoming part of the fabric of the local community, raising funds for community charities and fast-tracking the revitalisation of the city.

The centre staff have also raised a further $70,000 for other groups. 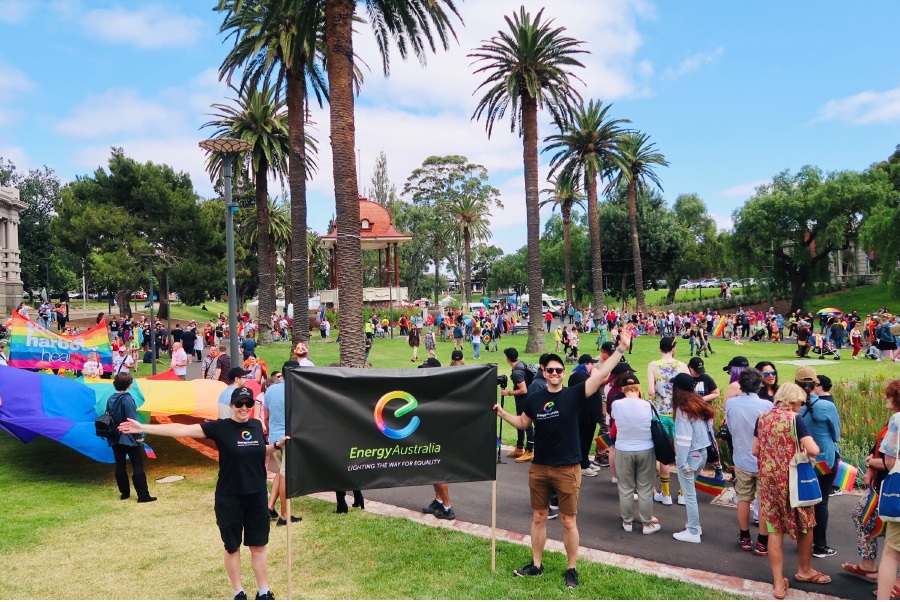 The centre marked its fifth year in the region in August and employs about 360 people from its site on Moorabool Street near the waterfront.

Employee surveys show staff value “the fact that they are able to work and give and live here”, especially because “they have the opportunity to give their time back to the community here, which is probably the most precious commodity”.

“Our people have really strong roots here. Some are multi-generational Geelong folks. Some have moved their families here for that sea change.” - Casey Kaminskyj, customer care leader, EneryAustralia Geelong

The staff at EnergyAustralia Geelong have supported Wombat’s Wish through workplace giving over the last 12 months.

Wombat's Wish chairperson Hannah Dawes says the support and generosity of the staff had helped to run camps this year providing bereavement support to children in Geelong and the Surf Coast area.

“Without their support these children may not have been able to receive the specialist care we provide,” Ms Dawes says.

Following the suggestion of one EnergyAustralia staff member, Wombat’s Wish is now developing a relationship with the local Children's and Baby market, “which increases our visibility in the community”, Ms Dawes says.

Staff have also taken part in a corporate volunteering program at Geelong Mums, which recycles baby equipment like cots, prams and car seats to families in need.

“Their staff go above and beyond with their assistance and are never afraid to get their hands dirty when it comes to cleaning and safety checking essential nursery items to be distributed to families in need in Geelong,” says Geelong Mums teamwork coordinator Kelly Suvoltos.

Westfield Geelong, whose stores employ about 700 people, is another example of business investing in the region. Annual retail sales in the centre were $270 million in 2018 and the centre services a trade area of about 300,000 residents.

Westfield Geelong will soon have a customised “Changing Place” public bathroom, in a move that will be significant to users of the facility as well as their carers.

The amenities are funded jointly by Scentre Group -- which owns and operates Westfield in Australia and New Zealand -- and the Victorian Government.

The amenities, which are expected to be complete by the end of the year, come after the Revitalising Central Geelong Partnership conducted an accessibility audit of central Geelong that found people relying on wheelchairs faced barriers to easy access.

Westfield Geelong centre manager Craig Tapping said they wanted customers to enjoy an “easy and positive experience” in the centres.

The Scentre Group has a dedicated community plan that shows its commitment to the local community. The group connects retailers with opportunities in the community and highlights existing partnerships that retailers have, such as Bakers Delight supporting local dads group Man with a Pram.

On October 1, the three Geelong recipients of the community recognition and grants program, Westfield Local Heroes, were unveiled.

The three local community members, nominated and voted for by the Geelong community, were each awarded $10,000 to go towards the work of the local organisations they champion.