“It's the biggest growth of any market we have in our entire network. So, it's phenomenal what's been occurring.”

The “virtuous circle” of big and small businesses generating economic activity, opportunities and jobs in Tasmania has helped the state hit its stride.

Business leaders from tourism, manufacturing and agriculture industries put this success down to businesses and enterprising people being the engine room of the country’s and state’s economy.

“There's 92 here, I think, in Tasmania in total, and we're very proud of buying Australian produce and to promote that on a world stage. 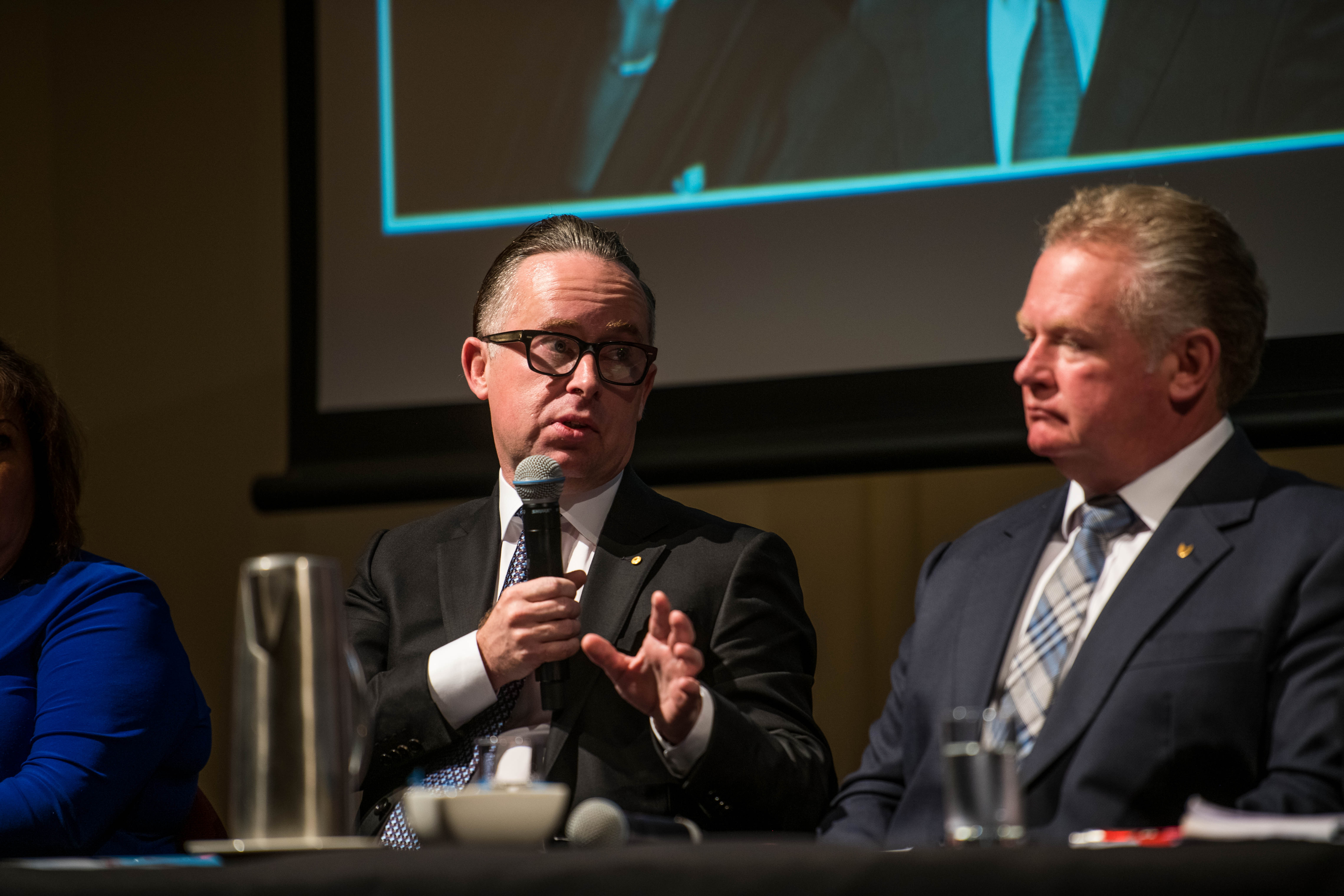 Business creates jobs, exports, innovates, pays taxes and creates vibrant communities. A spike in travel between Tasmania and the mainland has helped the island state increase jobs and this economic activity.

“The tourism story here is an amazing story … We've been using Tasmania around the country as an example of getting it right … the way it's worked here has been superb,” Mr Joyce said.

“In the last few years since 2013, Qantas has grown its capacity into Hobart by 63 per cent; Jetstar by 17 per cent. We have not seen that growth anywhere else in the country.

“It's the biggest growth of any market we have in our entire network. So, it's phenomenal what's been occurring.” 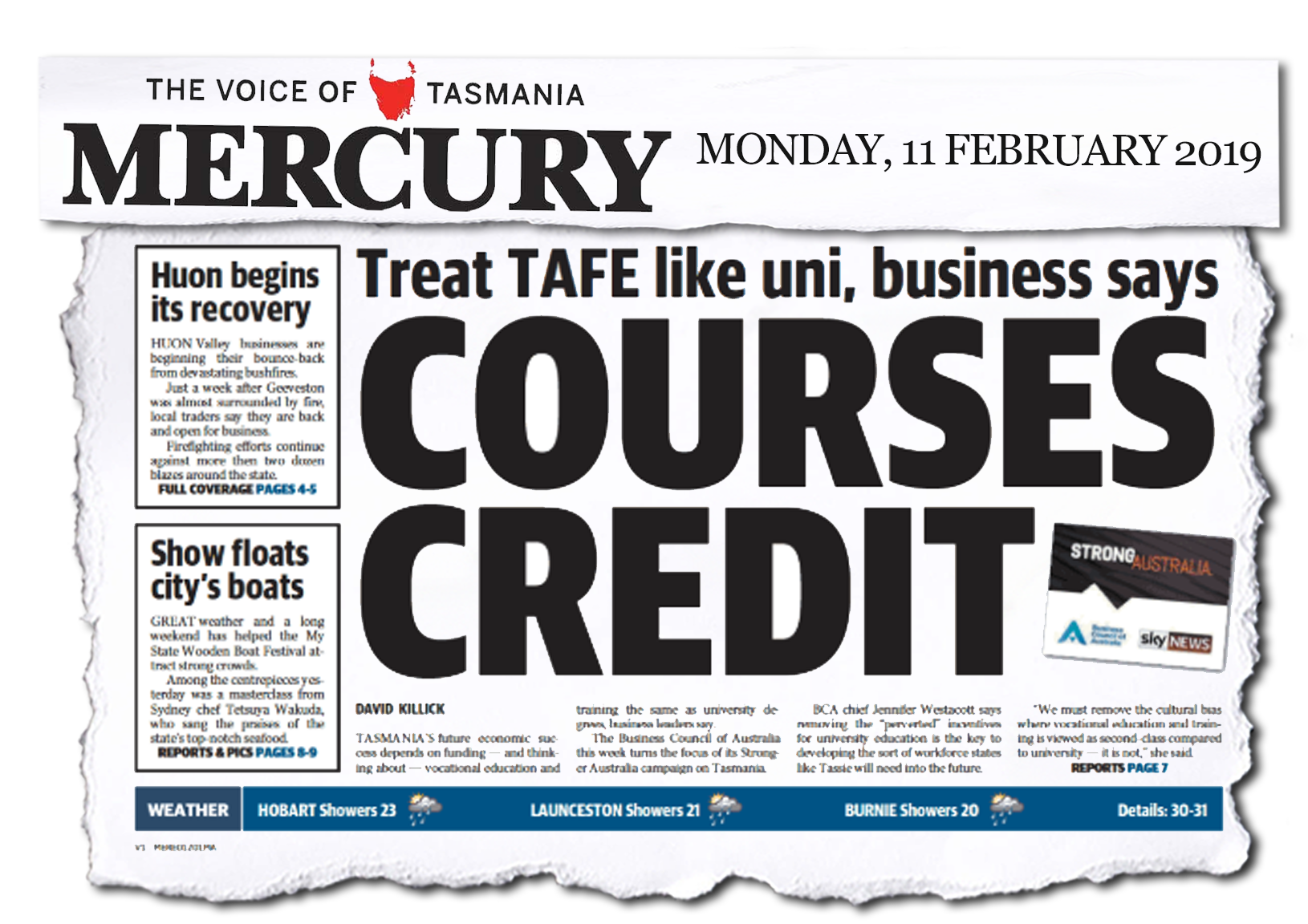 About 1.3 million visitors went to Tasmania in the year ending September 2018 and spent $2.41 billion. Tourism now employs more than 37,000 Tasmanians and in 2017 the state attracted 1.26 million visitors.

This partnership among businesses is felt by both big and small business.

“We started our company because of Incat (Tasmanian shipbuilder), as did many, many other satellite companies that are still in business today,” Liferaft Systems Australia managing director Mike Grainger told the Hobart forum.

“It's a wonderful relationship. But there are probably 20 companies who went through the same thing that we did as a result of one pioneer, and that's what Tasmanians do really, really well.

“When we set the company up, it was predominantly to supply Incat, as I said earlier, but we always said from day one, Incat will be the icing on the cake, the goal of the company is to be an exporter.”

These relationships between big and small businesses are worth about $500 billion to the Australian economy each year.

As a result, Tasmanian businesses are brimming with confidence – the state’s economy is growing at its fastest pace in a decade and wages growth is the second highest in the country after Victoria.

But businesses are acutely aware that they need to capitalise on it.

“We're on the crest of a pretty exciting wave in Tasmania, we just need to make sure we take advantage of it … And that's across to us in business to make sure that happens.”

“We're all telling the story of Tasmania and we're not competitors we are actually colleagues telling exactly the same story of our place.”

But there’s more to do. Regional centres are crying out for investment, development and infrastructure, and improved access to educational opportunities to lift their living standards and strengthen their communities.

Mr Grainger says infrastructure has not kept up with Tasmania’s growth.

“With the rise of popularity in Tasmania in recent years, I'm not sure that infrastructure has kept up with that rise. It's probably due to a lack of infrastructure spending going back 25 or 30 years ago,” he told the forum.

“We've seen quite a remarkable growth in brand recognition, and that's been driven across all sectors of industry and also education in particular, and the arts through Mona.

“We're at a place now that we haven't been for quite a long time, and I think infrastructure, particularly basic infrastructure like roads and bridges and things like that, is now struggling to keep up with the growth that Tasmania has.” 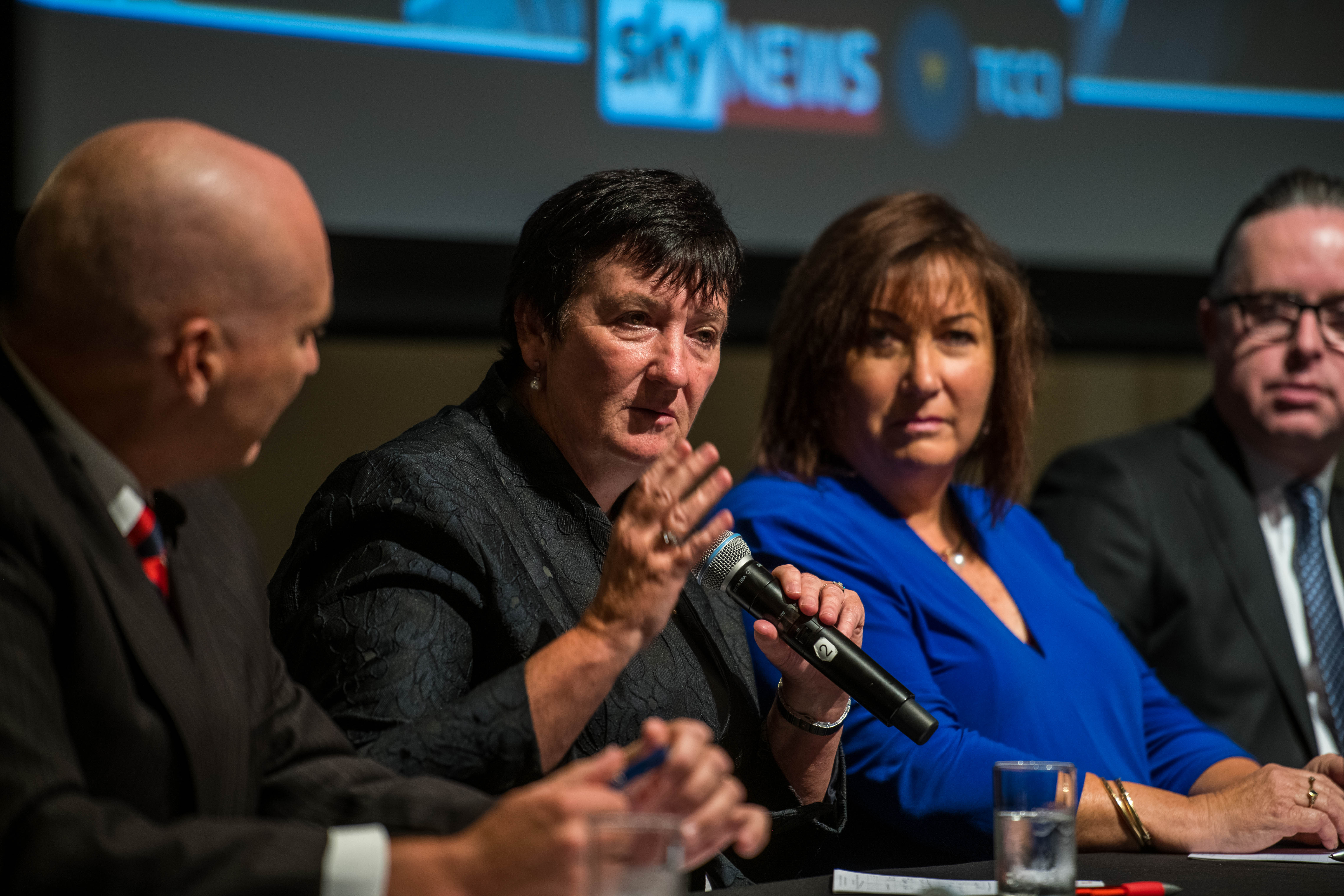 Business Council chief executive Jennifer Westacott used Mona – Museum of Old and New Art – as an example of how planning and infrastructure can make a difference.

“It just shows the power of vision, of planning, of risk taking, but most importantly just enterprise getting on and doing stuff,” Ms Westacott told the forum.

Keeping up with planning and infrastructure in Tasmania is something, Mr Joyce says, the state “needs to get right”.

“Do we need to make sure that there's enough hotel rooms and accommodation? And the great thing about that, there is investment happening here. I think there's another 3,000 rooms being built or being proposed to be built. That's more than Sydney, which is fantastic. But do we need to do more? Yes. And is there a huge opportunity? Massive.

“I think what Tasmania has achieved in terms of its great story for the rest of the country … it's something that other states and territories need to look at and figure how can you get all the elements that clicked in here and do it elsewhere.”

The aim is to shift the conversation beyond the major cities, and focus on real solutions to the pressing challenges that many Australians face outside Sydney, Melbourne and Canberra.

“If we're going to have all these extra people come into Tasmania, and we welcome them and we want them to come because they're a very important part of our economy, we actually need to spread the load and we need to think a little bit further than the next few years,” Ms Bender said.

“Then all those other small businesses that are there in the background will actually grow from that because I think that's one of the points. Larger businesses work so closely with smaller businesses; as I said in that clip, we've got 1,000 suppliers.”

Mr Bailey agreed that there needed to be a “smarter” approach to infrastructure and if he could “wave the magic infrastructure wand” a second interconnector to the mainland would be on his list.

“Look at Adelaide, for example, [they] had major issues with blackouts two weeks ago. We had hundreds of thousands of megawatts sitting idle in Tasmania that we couldn't get across Bass-link because we just don't have the power for it,” he told the forum.

“If we can get that interconnector up, we've got a number of major in-projects that will double in size.”

Ms Westacott told the forum the interconnector was a “no-brainer”, saying “why wouldn’t you underwrite this?”

Since the Strong Australia forum, Tasmania’s Battery of the Nation vision is a step closer after the Tasmanian Government, through Hydro Tasmania, committed up to $30 million to the project, on top of the federal government’s commitment to develop an underwriting mechanism for the project through its Underwriting New Generation Investments program. 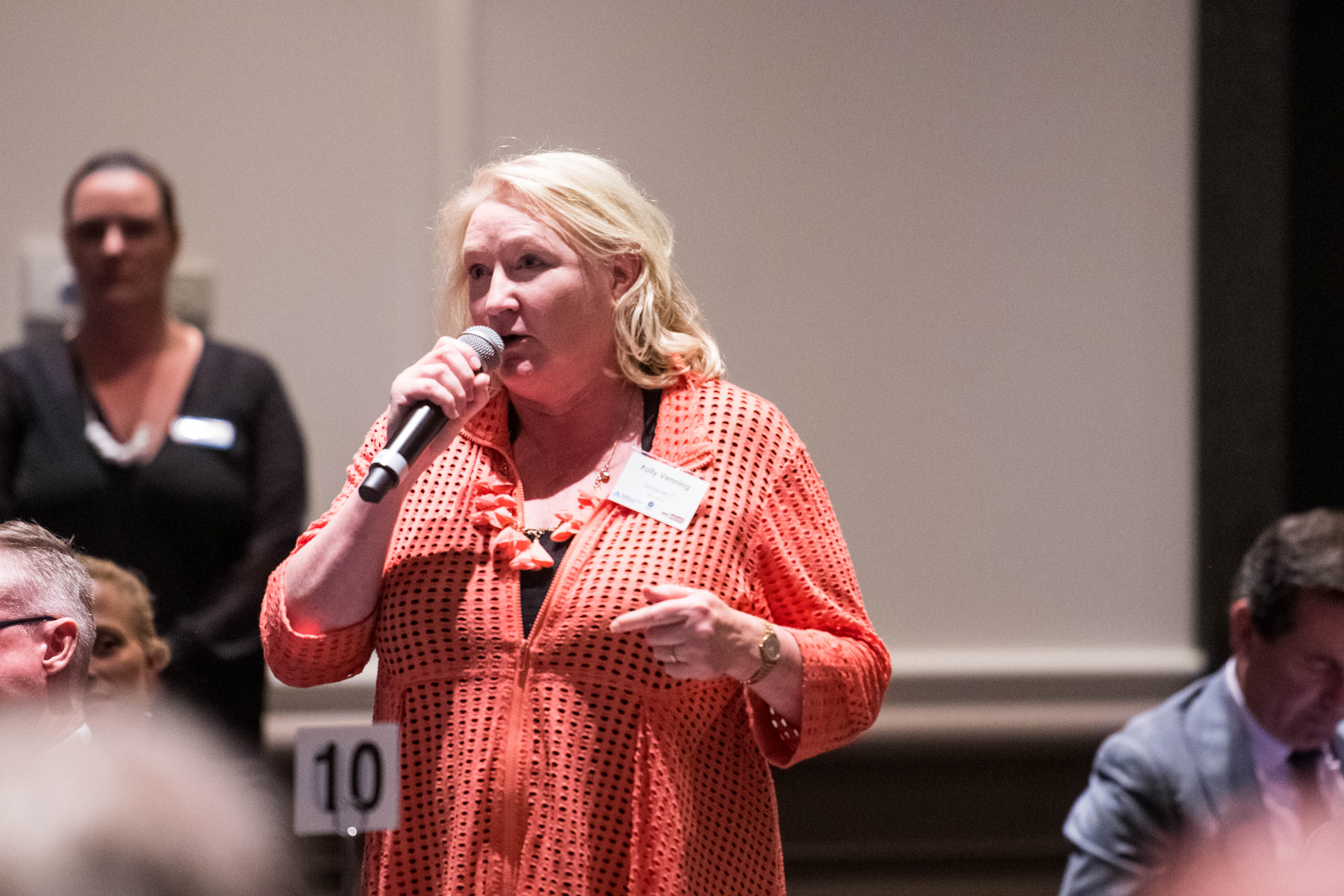