WHEN Liferaft Systems Australia first started manufacturing marine evacuation slides and liferafts 26 years ago they had about six employees and a single local customer.

Almost three decades later and they are employing about 70 people full-time and supplying their marine evacuation systems to navies across the world, including BAE Systems for the Australian Navy’s nine new frigates.

The business grew from supplying one local business with the world’s first “dry-shod” marine evacuation system, which lets passengers evacuate a vessel into a large liferaft without having to get their feet wet, to manufacturing their equipment for passenger ferries, cruise ships, military vessels and large yachts across the world.

Liferaft Systems Australia managing director Mike Grainger said his business originally set out to provide Hobart shipbuilder Incat with a safer and more compact and lightweight system suited to their high-speed ferry, but the business expanded with demand.

The original designs of the company’s slides and liferafts have remained much the same despite improvements to the engineering and manufacturing processes during the past 26 years.

But the most noticeable change is the company’s growth.

“The customer is getting a world-class product built here in Hobart and we’re employing Tasmanians and keeping the money that we make in Tasmania.’’

The business grew from six staff to about 15 within its first six months and evolved from being a local Hobart supplier to becoming a globally recognised brand, especially among defence industries.

“We’ve forged very professional relationships with a number of major companies like BAE Systems, BC Ferries, Washington State Ferries, different navies, the US Navy for example, Royal Dutch Navy. We’ve forged partnerships with companies like that over the last 25 years,” Mr Grainger said.

“The customer is getting a world-class product built here in Hobart and we’re employing Tasmanians and keeping the money that we make in Tasmania.”

“We also are supplying to the new BAE Systems’ Type 26 vessels which are being built in the UK and also in Australia, so the navy market is expanding for us and  it’s good long-term business.

“Dealing with a company like BAE is very rewarding for us. It gives us longevity. They understand the importance of quality, and they're very good to deal with.”

“We rely on each other to keep investing, growing and employing more Australians. Businesses of all sizes benefit from new investment.’’

“The products built right here in Australia’s backyard by Liferaft Systems Australia are world-class and they’re lifesaving for defence personnel who rely on them,” he said.

“We rely on each other to keep investing, growing and employing more Australians. Businesses of all sizes benefit from new investment.”

As Liferaft Systems Australia goes from strength to strength, the Tasmanian economy tells a similar story.

The latest CommSec State of the States report released in January 2019 shows Tasmania in fourth position on the economic performance rankings.

Tasmania’s employment growth in 2017-18 was the strongest growth in nine years and wages for the private sector in Tasmania are up 2.8 per cent through the year to September 2018, the fastest growth in the country.

“Tasmania has gone through some significant change and the level of brand awareness that Tasmania is now enjoying is unsurpassed,” Mr Grainger said.

“People are understanding that this island state is a very special place. It is certainly the flavour of the month.

“We’ve seen things like Mona, we’ve seen food and wine, manufacturing, all the major industries, tourism, growing very well in the past five to 10 years. And the fruits of that growth are starting to be presented to the state. And it’s an incredibly exciting time to be in Tasmania and be a Tasmanian and I think the future looks absolutely fantastic, providing we can stay on the roll and do what we do best.”

There are two vital staples within Liferaft Systems Australia’s advanced manufacturing processes that ensure their slides and liferafts are ironclad when it comes to safety and reliability.

The first is the business’s culture and the second is the skills they equip their staff with as part of an in-house skills and training regime.

“We have a very onerous, comprehensive training process that starts when you walk in the door. And that starts with culture and with attitude and it goes right through until you’re fully qualified to do what we do here,” he said.

“We have our own skills register and training processes so we employ people mainly on their culture, their attitude, and we put them through a very onerous process for three months and then a further three months, before we accept them into the company.

“It may not be so cost effective initially but if we’re looking to the future, we need to look at a digital future, a wireless future, and improve on our manufacturing capability from a technical perspective.” 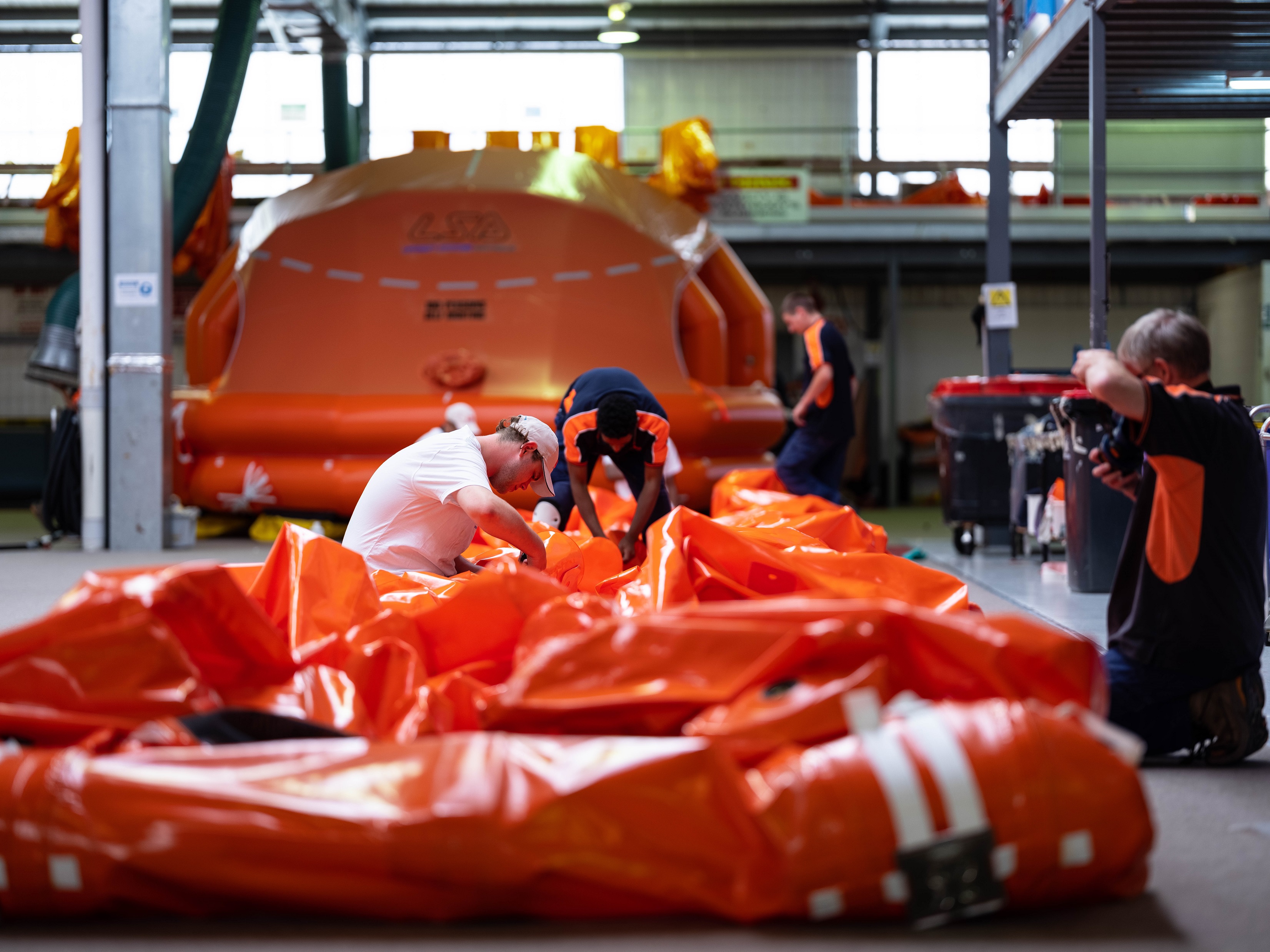